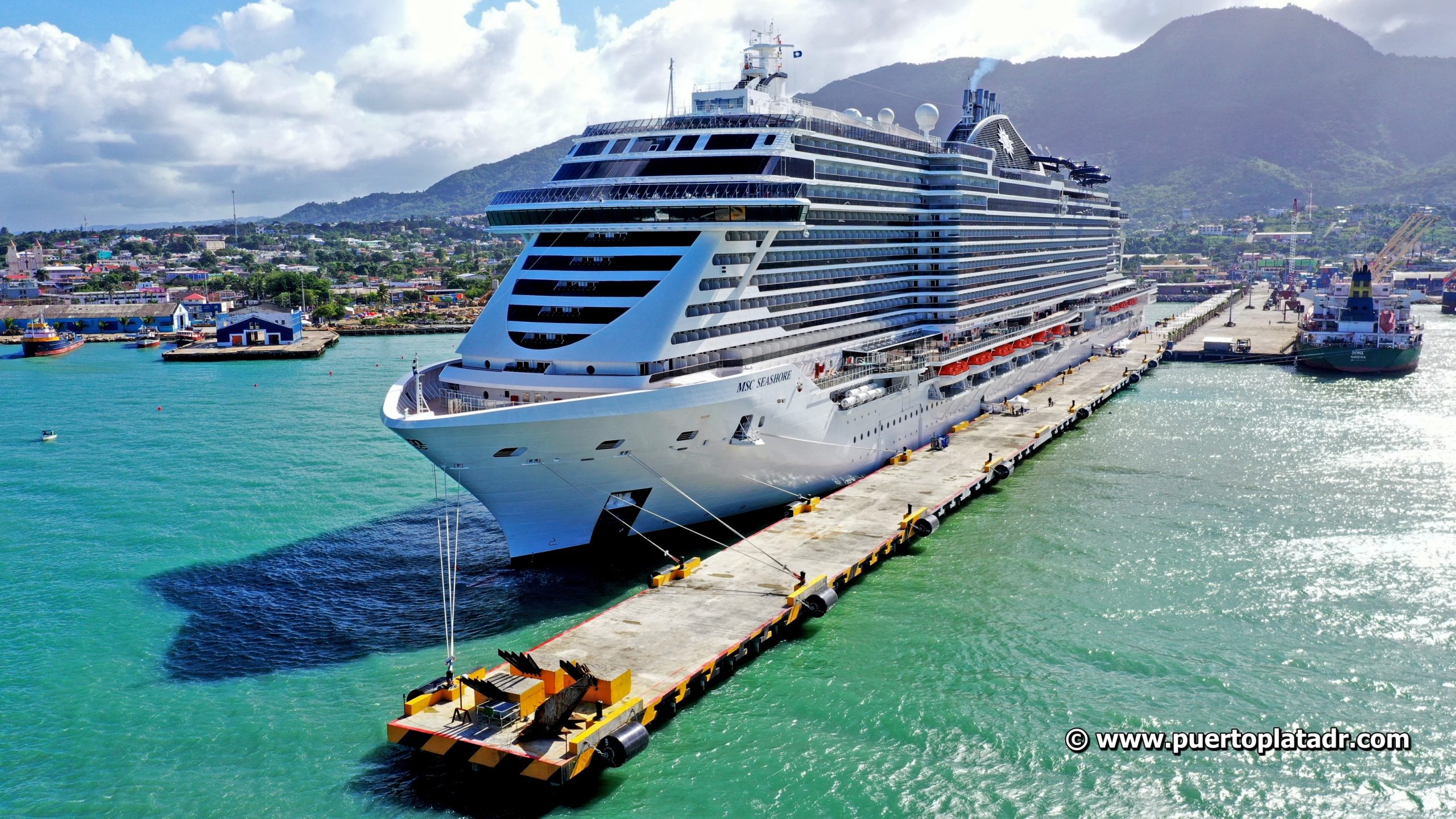 Taino Bay Port in Puerto Plata opened operations today with the arrival of the MSC Seashore, a modern EVO class cruise ship with 1,700 passengers and capacity for 4,540 plus crew. The ship was built for MSC Cruises in Italy, and arrived on December 15th, 2021 at 8:00am to host the inaugural ceremony with the Dominican Republic President Luis R. Abinader.

In the new Taino Bay, cruise passengers will arrive at an exciting destination with elements related to the pre-Columbian Taino culture, as well as an ecological park, water slides, encounters with wildlife, restaurants, shops and other entertainment. From there they will have direct access to the historic center of Puerto Plata, with its colorful Victorian-style houses and buildings.

Taino Bay will replace the old Puerto Plata cargo port, placing cruise passengers a few steps away from the historical district that includes Fort San Felipe, an important historical site, and the colonial heart of Puerto Plata where an area of ​​16 blocks will be undergoing major renovations and improvements from the government.

Grupo ITM from México invested $80 million into the first stage of the Taino Bay development, which includes the dock and two-berth dock facilities. Some dredging was required to bring the shipping channel and basin depth to 11.5 meters / 38 feet, and a former power station and fishing pier will be removed.

The existing loading dock will be expanded to 400 meters / 1,312 feet, to allow for a couple of Oasis-size ships alongside. In the second stage, an additional 300 meters / 984 feet extension is planned so that three Oasis-sized ships can call simultaneously.

The new dock at Taino Bay has three docking positions and a passenger reception center with a capacity to accommodate about 14,000 cruise passengers simultaneously. This terminal will generate 1,500 direct jobs and 3,500 indirect jobs.

The second arrival to the port on December 17th was the gorgeous, 333 meter long Norwegian Encore, a Breakaway Plus class ship with 4,200 passenger berths, built for and operated by Norwegian Cruise Line. Other ships scheduled to arrive in the first month of operation are the Celebrity Millennium, Scarlet Lady, and Celebrity Reflexion.

President Luis Abinader informed that the country will be receiving the most important international cruise companies such as: Royal Caribbean Cruises, Virgin Voyages, MSC Cruises, Norwegian Cruise Line, TUI Cruises, Celebrity Cruises and Regent Seven Seas Cruises. He also indicated that the projection for the year 2022 is 750 thousand visitors, a figure that he considered could increase according to the actual rhythm. See the cruise ship schedule in the Taino Bay Port Arrivals page.

The third arrival to Taino Bay was the Scarlet Lady from Virgin Cruises, a gorgeous ship that carried over 2,000 tourists. The same day Puerto Plata welcomed over 7,000 tourists from two other ships that docked at the Amber Cove port from Carnival Cruises. It was a glorious day to see the city handling this many tourists in a very professional way.

What Is Included in Royal Caribbean’s Ticket Price?